In 1874, a man by the name of David Simpson settled in the area of modern-day Mount Dora with his family. Simpson built one of the first homesteads in Mount Dora. The first postmaster who worked in the town was Ross C. Tremain. Tremain also became one of the town’s major real estate developers. Though the post office has always been named Mount Dora, Tremain decided to call the unincorporated town Royellou, which was a derivative of his three children’s names, Roy, Ella, and Louis. Long before the town existed, surveyors named a lake in the area “Lake Dora” after Dora Ann Drawdy, so in 1883 it was decided to name the town after the lake. The word “lake” was dropped and replaced with “mount” in order to reflect the fact that Mount Dora sits on a plateau approximately 184 feet above sea level. Furthermore, there is Dora Drawdy Way which is an alleyway in Mount Dora’s historic area. Mount Dora became a favorite winter retreat for fisherman, boaters, and hunters, which led to the Alexander House opening in 1883. The Alexander House is a two-story hotel that still stands and is on the National Register of Historic Places.

Residents of Mount Dora are fortunate to live in such a place that allows them to be only minutes away from Orlando, with all the amazing wonders it has to offer, while enjoying a small town environment. Some of the most popular destinations in Lake County are any one of the numerous natural green spaces available. For example, you have Lake Louisa State Park 45 minutes away in Clermont, comprised of saw palmettos, live oak, and bald cypress. Besides Lake Louisa, other smaller lakes are contained within the State Park as well, including Bear Lake, Dude Lake, Dixie Lake, Hammond Lake, and a few smaller lakes scattered about. Located in Fruitland Park, you have Lake Griffin State Park which is comprised of approximately 578 acres of hardwood upland and swampland. A few of the activities allowed at Lake Griffin State Park are kayaking, canoeing, hiking, fishing, camping, as well as wildlife viewing. As you stroll through the park, you’re bound to see bald eagle, anhinga, American alligator, osprey, and various other kinds of wildlife. Another popular lake near Mount Dora is Lake Harris, around 31 miles northwest of Orlando. The local residents refer to Lake Harris as "Ocklawaha Chain of Lakes" or "Harris Chain of Lakes", depending on who you’re talking to. In addition to that, The Mall at Millenia is only a short distance away when you’re looking to do some serious shopping and dining out. Located at 4200 Conroy Road in Orlando, this upscale shopping mall has over 150 stores and is anchored by big names such as Neiman Marcus, Bloomingdales, and Macy's.

Single-family homes for sale in Mount Dora, Florida, area feature a variety of floor plans, architectural designs, as well as lot sizes. Houses for sale in Mount Dora range in size from two bedrooms, two bathrooms, and 1,637 square feet to four bedrooms, three and a half bathrooms, and approximately 2,838 square feet. Some of the amenities that are found in these homes include split floor plans, walk-in closets, oversized covered patios, granite countertops, Tropical pools, and much more. If you’re interested in building a home in one of the neighborhoods in Mount Dora, there are plenty of vacant lots on the market of various sizes as well. Furthermore, if you haven’t found anything you like in Mount Dora, we can help you find what you’re looking for in one of our neighboring cities. Whether you’re interested in Mount Dora real estate or other properties in Lake County, contact us today for more information or to schedule a tour.

Welcome to one of the most beautiful homes in Lakes of Mount Dora, the Santa Maria VIII. Words and pictures do not do justice to how incredible this home is. Entertaining...

Be the first to live in this Beautiful Brand New Custom Home minutes away from Historic Mount Dora. This terrific floor plan has 3 bedrooms and 3 full bathrooms plus an ...

This is a Great Opportunity to own a home in a premiere community, THE COUNTRY CLUB OF MOUNT DORA. You will enjoy the Saint Andrews lifestyle which offers Maintenance F...

This Charming Lake Dora Villa Condominium is located in the heart of Mount Dora. With views of Lake Dora you are just a short walk to downtown Mount Dora's many restauran...

WELCOME to one of the most beautiful homes in Lakes of Mount Dora, the Santa Maria Gold. Words and pictures do not do justice to how incredible this home is. Every turn...

This home is nestled in the beautiful community of "The Country Club of Mount Dora". The residence includes an open-concept, split floorplan with vaulted ceilings, 2-bedr...

RARE opportunity in this sought after hamlet of Lake Dora Oaks in Mount Dora! Wonderful 2 bedroom 2 bath pool home with split plan is within minutes of downtown Mount Dor...

Nestled under the cool shade of sprawling oaks, this 1926 Florida farmhouse features a rare combination of vintage exterior architecture with a meticulously maintained 21...

Highly sought after Downtown Mount Dora Condo - Only 28 units in the complex. You're going to fall in love with this beautiful 2 Bedroom, 2 Bathroom, stylish furnished co...

One or more photo(s) has been virtually staged. This Mount Dora one-story corner home offers granite countertops, and a two-car garage. 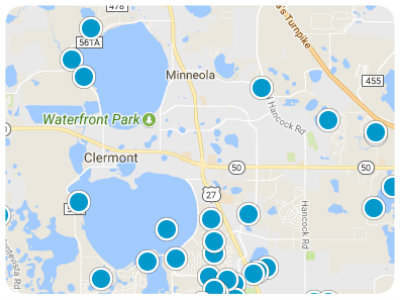